Anders lived up in the woods in the trailer that his parents had left his sister Annie and him. Each day he would walk through the woods to the Hermit bar when they opened around 12 noon. He would stay until the bar closed and before going back home he would buy himself some more beers for the walk.

Sometimes if he felt the night was still young when the bar closed, he would walk to Jans trailer, no matter how late at night it was and he would call Jan; “Jan, Jan, come out and have a beer with me”. Often this would only wake up Jan’s wife Ingrid, but she would then wake up Jan “Jan, Anders is here, go have a beer with him”. Jan would then step out of bed, and bring his own beers outside the trailer; Anders only drank Budweiser and Jan would prefer Tuborg. They would drink a few beers and look at the night, until Jan would be too tired and go back to bed. Jan never minded getting up in the middle of the night to drink beers with Anders, guests were always welcome.

One day when Anders was walking home from Jan’s, being a bit more drunk than usual, he passed out next to the road. This had happened before; normally he would wake up when either the sun made the sleep too warm, or when the alcohol would leave his blood and he would start to feel the cold in winter. He would get up, then he would continue his walk home, getting ready for the next day.

This time when the sun came up Anders did not wake up, he continued to lay next to the road not moving at all. A few cars passed by, they didn’t pay any attention as they had seen Anders sleeping next to the road before. But when the sheriff drove past Anders for the second time that day, he got suspicious and stepped out of the car to check if Anders maybe needed a ride home – or to the bar. However no matter how hard the Sheriff tried, he could not wake up Anders and he also could not find a pulse, so with sadness the sheriff realized that Anders was not sleeping this time. He picked Anders up at put him in the backseat of the car. The drive to the morgue was quite long and it was starting to get dark.

It was not the first time the Sheriff drove one of his citizens like this to the morgue. They were all good people up here in the woods, but tough lives and the heavy use of alcohol often made them leave the woods this way. The Sheriff was in his own thoughts when he heard a noise from the backseat “Where the fuck am I?” said Anders with a rusty thin voice, then he sat up. The Sheriff had been sure Anders had left this world and was quite surprised, but he turned the car around, offered Anders a beer from the glove compartment and drove Anders home, relieved that Anders was in fact still alive.

Years later the Sheriff passed by the same spot next to the road, Anders was again lying there sleeping. The Sheriff paid no attention, even after the second time he passed by, remembering the time Anders suddenly woke up in his car, but when he saw the body still lying there the day after, the Sheriff stopped and stepped out. Anders was cold, there was no pulse and the Sheriff could not wake him up. He was still suspicious, so he called the doctor to the come visit.

The doctor arrived and the Sheriff asked him to check if Anders was dead before he would embark on the long drive up to the morgue. The doctor checked Anders and there was no doubt, Anders was dead!

The two men lifted Anders into the backseat of the car, and the Sheriff started the car and drove towards the morgue, when he was almost there, a noise from the backseat broke through the music on the radio and Anders sat up “Where the fuck am I?”. The Sheriff was shocked and almost lost control of the car before he came to his senses and offered Anders a beer, apologised and drove him home.

Anders and his sister Beth were sitting at The Hermit Bar, it was a quiet day, the summer heat had caused the other customers to stay home, so it was only the two of them there, the bartender had gone home and left them the key.

Maybe it was the beers, maybe the heat, but suddenly Anders fell from his chair and lay silently on the floor. Beth stepped down to help him, but Anders did not wake up. Beth knew her brother very well and she was in no doubt her dear brother was dead. Beth was a bit worried as she had paid for all the beers they had that morning. Anders would always pay her back and he was the only person she would lend money for beer – she trusted him. She needed the money back, she was always low on money – life is hard sometimes.

Beth looked around the bar, all was still silent and no one was around. She reached for the pocket in Anders’ vest, but there were no coins, only his checkbook. She took it, went around the bar counter to find a pen, looked over the bar once just to be sure Anders was still dead.

She then wrote a check from Anders to herself, just enough to cover a few months of rent and a nice funeral for her brother.

She then checked one extra time that Anders was still dead, and left The Hermit Bar to get Jan and the Sheriff. All three of them drove Anders to the morgue, there was silence in the car all the way there – not even Anders was talking.

Beth made sure to tell Jan and the Sheriff that her brother had even left her some money in case he should pass away – always looking after his dear sister. Everyone knew that losing Anders was tough on Beth, the siblings had always been close. 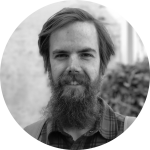 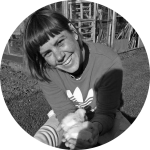